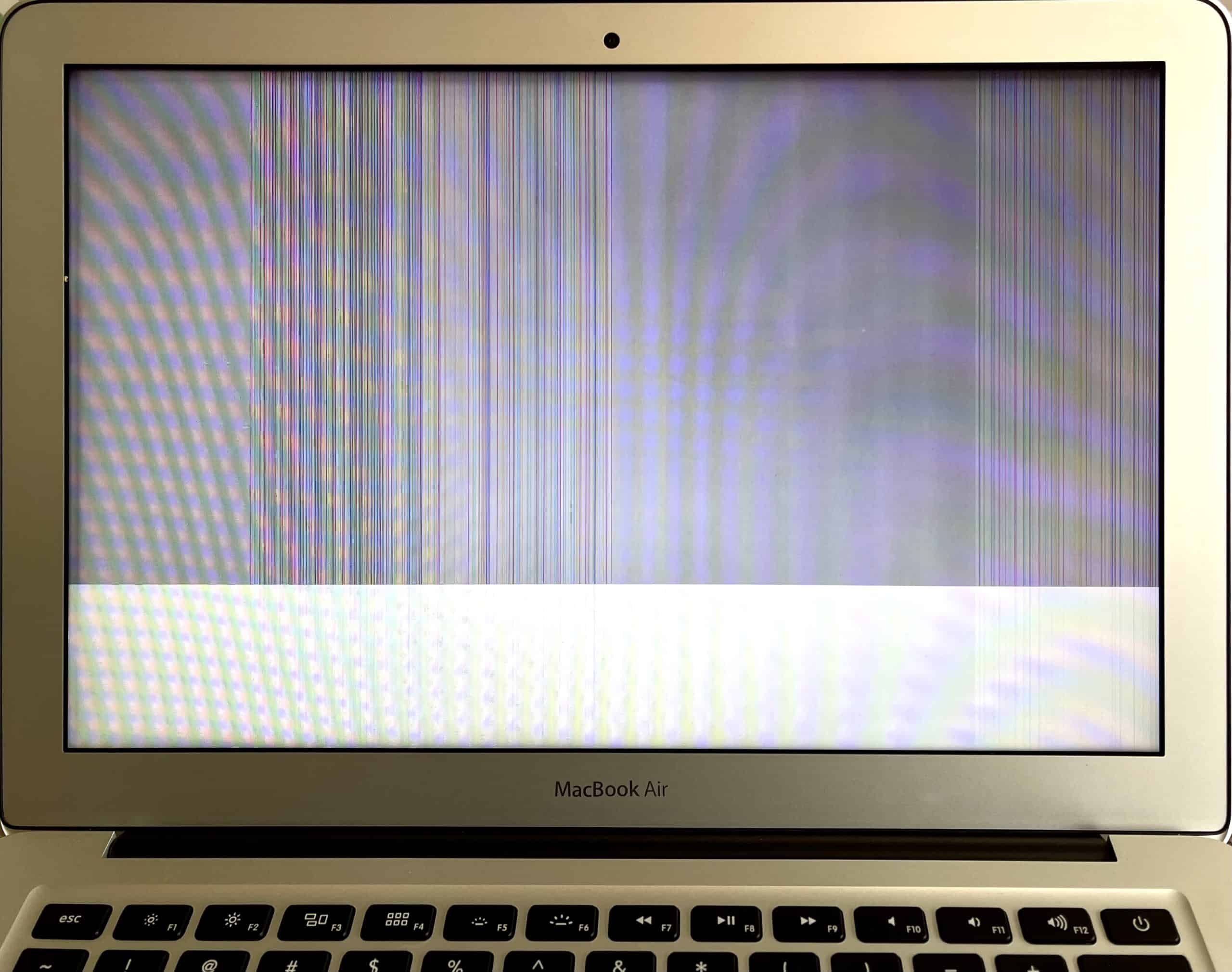 There is a common screen failure with the 2017 MacBook Air display assembly that causes the LCD panel to show just vertical lines with a horizontal break between one darker area and a lighter area. A picture of this issue is below.

I have seen hundreds of these across all models of the A1466 13″ MacBook Air, but I see the most in the 2017 model. I am not sure why the 2017 model seems to break more commonly in this fashion, but I can say what causes the issue!

What causes this common screen failure:

The issue shown above is caused by a hairline crack along the left side of the screen. The crack is in an area on the LCD that is not visible due to the metal frame (the bezel) that surrounds the LCD panel.

This crack may form from some sort of hit or physical jarring, but I have heard from many clients that it just seems to appear out of nowhere. I believe it may be caused by the flexing of the screen when opening, closing, or holding the computer by the edges of the screen.

When opening or closing the air by a corner of the display, you are causing a twisting flex in the display housing including the LCD panel. I think this is what causes that cracking to occur on the left side of the display.

Why just the left side? Again, I am not certain, but I believe it is due to the fact that there is more adhesive holding that side of the LCD panel to the display housing. I believe this extra adhesive locks the LCD in place to a point where it doesn’t allow the flexing of the panel, thus causing it to crack.

Another reason for the crack to be on the left side might have to do with the placement of the sleep magnet, the frame being weaker on the left side, or a combination of issues. It also may be because most people are right-handed and close the lid with their right hand causing the flexing on the left.

Pictures of the damaged LCD panel

Below are pictures of the LCD panel. In the photos, we are looking at the back of the panel, so the right becomes left and the left becomes right. So you can see in the first picture what the edge along the LCD should look like. In the second picture, you see what happens on the left side of the screen where the cracking causes the display issue.

I have repaired hundreds of A1466 Macbook Airs with this issue. I have yet to see one come back with the same issue as shown above. I believe the lack of the same issue happening again is due to the replacement adhesive allowing more flex to the LCD on that left-hand side.

Below you can see a picture of the same computer shown above with a new LCD panel installed.

By just replacing the cracked LCD panel, you can save hundreds of dollars.

If you would like to get your MacBook Air LCD repaired, I can help! Just send a note with a picture of the damage using the form below, and I will let you know what service you need. I also have an affordable MacBook Air price list you can view.

If you would like to have your computer repaired and are not sure the costs involved or what service you need, please fill out this free quote form. I will reply to you within a few hours.