You are here: Home / Blog

Our number one repair is (you guessed it) cracked screen repair! But we also do a ton of other repairs as well. Liquid damage is one of our favorites because we are usually able to help get a computer back up and running for $100’s less than what Apple charges. Sometimes the damage is so bad that we end up recommending Apple’s flat rate, but those scenarios are rare indeed. 90% of the time we are able to repair the computer for substantially less than Apple.

Here is a list of components that are damaged often when liquid enters your laptop in our experience:

Whatever the issue is with your computer, we recommend not trying to turn it on after it comes into contact with liquid. The best idea is to take it to a shop (like us) to complete a free diagnosis and a cleaning if necessary.

We always start the process with a free diagnosis. We take apart the machine to see how far the liquid got and which components are in need of repair. Sometimes the liquid doesn’t even make it to the internal components and the only replacement needed is the keyboard itself. Other times the liquid will have reached the logic board, but not shorted anything. In these cases we are able to clean the logic board with an ultrasonic cleaner to safely remove the liquid.

There are times where the logic board itself is damaged and there is a short causing the computer to not work. In these cases we offer a logic board repair service. We only charge for the service if it is successful. If we are not successful in repairing your logic board, there is no charge at all for the attempt.

The DC-in board is usually one of the cheapest parts to replace. There are times where the liquid just comes into contact with this part and swapping it out brings your Mac back to life. The DC-in board is also known as the MagSafe board because it is where your computer power cable plugs into the computer.

As you may have noticed, a lot of the parts that are damaged have something to do with moving electricity around your laptop: logic board, DC-in Board, and now battery. This is because the liquid can create a bridge for electric to flow from one chip to another where it isn’t supposed to go. This is called bridging a connection. Parts that have energy flowing through them are easily bridged by almost all liquids. As you can imagine the battery is one of those parts that is prone to shorting with liquid damage.

Some models have a second smaller board that have some of the ports. This smaller “IO board” connects to the logic board and if it is not working properly it can cause all kinds of symptoms. This is usually one of the cheaper fixes for liquid damage as it is an inexpensive part and can be swapped out without too much difficulty.

Whatever the issue is with your Mac, we offer liquid damage diagnosis and repair nationwide through our mail-in service. You can click to start the process of sending your Mac in for repair.

This 11 inch MacBook Air A1466 was hit on the back of the screen, causing the LCD panel to become damaged and show black and purple spots on the display. We repaired this laptop by replacing the LCD panel. Sometimes display damage really can look like art! 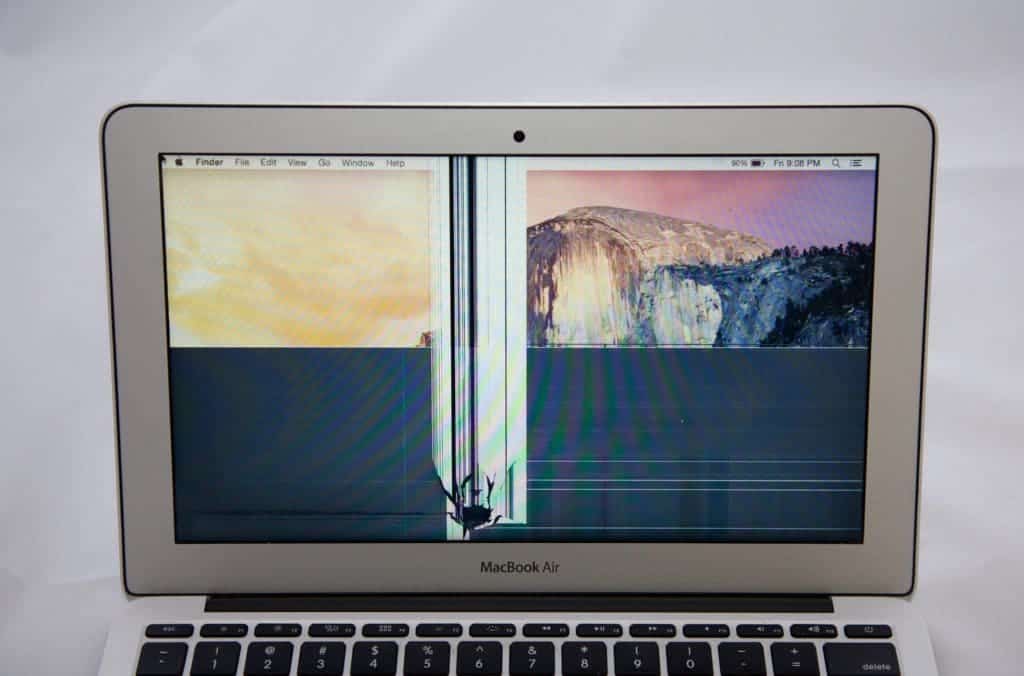 This 11 inch MacBook Air took a direct hit to the bottom front of the screen, causing the LCD panel to crack and display vertical and horizontal lines. Replacing the LCD panel fixed the problem.